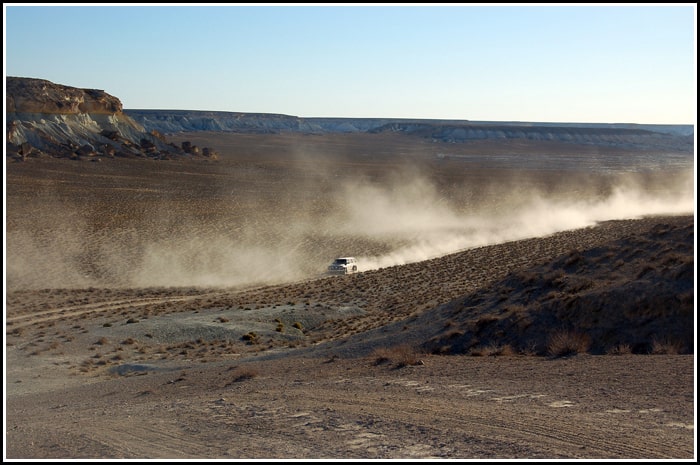 Day 1: Ashgabat
You will meet the group at the international airport and drive to Ashgabat. We hope you will be satisfied by Turkmen treasure 7. Today you will have the city tour and visit the Ertugrul Gazi mosque. The Azadi Mosque is the largest one in Ashgabat and can occupy to 5,000 people. It was built in Turkish style and called in honor of Oguzkhan Ertogrul - Osman I, who was the father of Osman Empire first leader. We will visit Russian bazaar or Gulistan in Ashgabat. It is one of the largest and oldest markets in the Turkmenistan located in the centre of the city. The "Russian Bazaar" was built in 1972-1982 by the design of the Russian architect Vladimir Visotin which later included in the "Ashgabat Reconstruction Program of 1970-1980." Night is in a hotel.

Day 2: Ashgabat - Kow Ata - Nokhur - Balkanabat
After having a hearty breakfast, we will travel the Kow Ata underground lake. It is situated 100 kilometers far from Ashgabat. You will see a warm stream in the depth of 60 meters from entrance into the cave. There are 350 stairs lead to it. Later on we will drive to the Nohur village for 4 hours. From Ashgabat in the west of Kopet Dag range there is a region established by Turkmens of the mountain tribe Nokhur that have for centuries conserved their inimitable culture, traditional crafts and architecture. Nokhur is in the list of 100 the dreamiest places of the world. Attractive villages Old and New Nokhur on the mountain highland are loveliness of two-store houses of distinctive architecture that are on the mountain cliffs among vines, almond and pomegranate trees. We will drive to the Balkanabat region. Night is in a hotel.

Day 3: Balkanabat - Yangykala - Gozli Ata - Turkmenbashy - Awaza
The tour will start by driving to the Yangykala canyon. A massive rock landscape with rock walls of 60-100meters tinted with pink, red and yellow colors. A scenery that was made more than 5.5 million years ago, beautiful red cliffs wall where underwater limestone walls full of enormous coral reefs from the pre-historical Parathetys Sea.  Afterwards we will drive to the Gozli Ata, Turkmenbashy and Awaza. Overnight is in a hotel.

Day 4: Awaza - Turkmenbashy - Ashgabat
In the morning you will have free time to rest in Awaza, which is defined to be a touristic zone in Turkmenistan, located at the east side of Caspian Sea. In the afternoon, we will drive to Turkmenbashy and have flight in Ashgabat. Night is in a hotel.

Day 5: Ashgabat - Darwaza
Today we will visit the carpet museum and drive to the Darwaza gas crater. The best time to observe it is evening. You will see captivating view of the gas crater and take photos on tours. Night is in a tent.

Day 6: Darwaza - Ashgabat
In the morning we will travel Ashgabat city. On arrival we will visit the memorial complex and learn more about the period of the time of the war the "Second World War (1941-1945). Later on we will drive to the Alem cultural and entertainment place and visit the Palace of Happiness. Transfer to a hotel for sleep.

Day 7: Flight
In the morning is transfer to the airport. Turkmen treasure 7 is over.